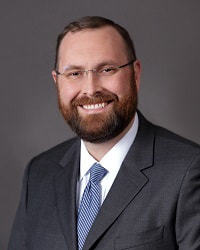 ​Robert grew up in Bellefontaine, Ohio as the middle of three children. He graduated from Bellefontaine High School in 1996 and then enrolled at The Ohio State University. After graduating from Ohio State, Robert headed west to Oregon where he attended Willamette University College of Law located in Salem, Oregon. While attending Willamette, Robert served as the Associate Editor for the Willamette Law Review and the Research Editor and the Format Editor for the Willamette Journal of International Law and Dispute Resolution.

Upon graduating law school Robert moved to Nevada where he spent over four years working for the Law Offices of Mark Wray and another three years as a Deputy Attorney General with the State of Nevada Attorney General’s Office. In 2013, Robert moved back to Ohio to be closer to his family. Robert is married with three daughters.