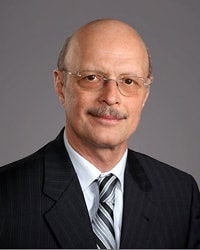 ​​David was born and grew up in the greater Cleveland, Ohio area and came to Central Ohio to attend Capital University. English and history were his dual majors and he wrestled for 4 years becoming team co- captain in his senior year.  David graduated from Capital in 1969 summa cum laude and was scheduled to teach as a graduate assistant at Ohio University while working on his Master’s degree.  Uncle Sam had other plans, however, and after receiving his draft notice, David enlisted in the U.S. Navy where he spent the next 4 years.  After completing his tour of duty, he attended the Moritz School of Law and graduated from there in 1977.

David began his legal career as an associate for Krumm, Schwenker and Fisher and became a partner with that firm after 4 years.  He and George Fisher remained partners in various configurations for over 30 years until George’s death in 2008.  David will be marking his 40th year of practice in December of 2017 and has no intention of retiring or slowing down.  He jokingly says that his retirement plan is a body bag, but people who know him, know that is not really a joke.  David enjoys the practice of law and likes nothing better than to get involved in complicated legal matters or cases with lots of twists and turns.  He is licensed to practice in the courts of Ohio, the United States District Court, Southern District of Ohio, the United States Court of Appeals, 6th Circuit, Federal Tax Court and is admitted to practice before the Supreme Court of the United States.  His primary practice areas are banking law, real estate, contracts, and litigation.  David also is currently serving as the Treasurer for the Licking County Bar Association.

David lives on a farm in Utica, Ohio with his wife and 11 dogs and cats.  He is an avid reader, loves to travel and relaxes by playing the guitar.
Website by Data Resolutions